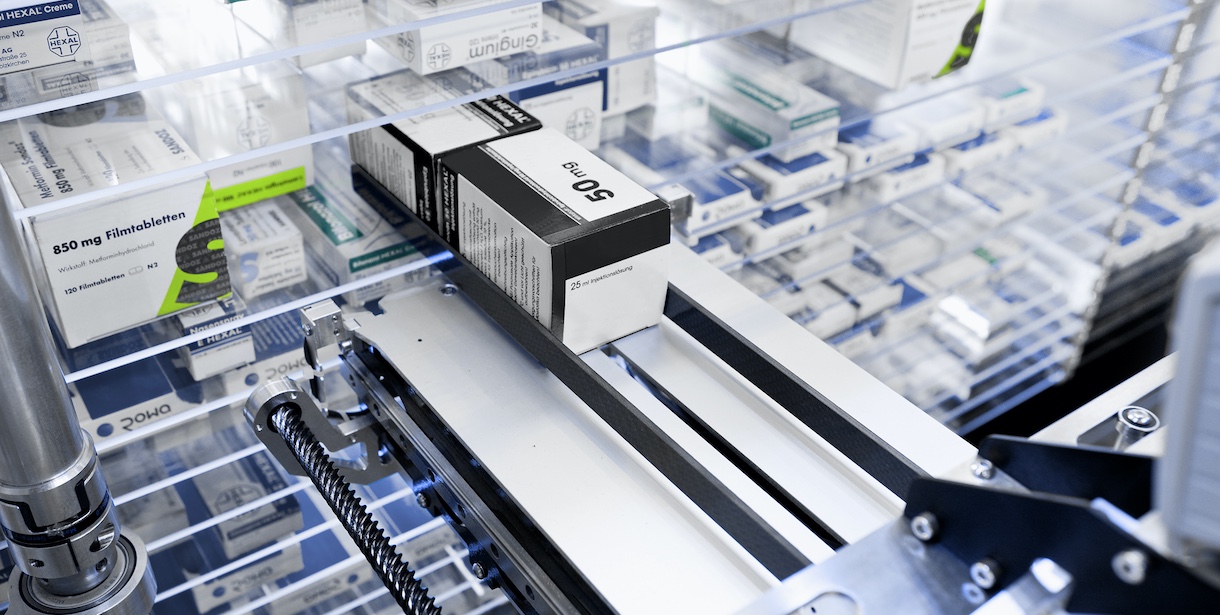 Within a week or two, the staff were saying ‘why didn’t you do it sooner?’, says Jon Flitcroft, manager at Albert Wilde in Fleetwood.  The large health centre pharmacy had its 11m BD Rowa Vmax installed in February 2017. Describing the week it took the robot to be installed from start to finish, he says: “We thought in advance about what we were going to do, so it went as smoothly as this amount of upheaval is likely to.”

Looking for efficiency and safety in an increasingly busy pharmacy, after researching the options, the decision had been made. He makes the rest of it sound easy. “We said we wanted a robot, BD Rowa came down. We threw a few ideas around.” The company’s northern territory manager Helene Fisher takes up the story. “We do the scoping, we made some adjustments along the way, but it was pretty straightforward.” The only challenge at Albert Wilde was some girders in the roof. “We look at the area we can get most out of with the least disruption,” she says. “We always maximise on the height where possible, but here is was a no brainer where it was going to go”.

The whole process from signing an order to installation usually takes around four months. The lead time from order to delivery is around three months, the build takes a week, then a week for commissioning, two or three days training and you’re ready to go. Of course, building issues can add to the time needed from start to finish.

“Our shopfitters came in about four weeks before the robot was due to clear the area where it was going, so we had a big empty space where the robot was going to go,” Jon says. A temporary dispensary was established; the remaining shelves were crammed with stock. “It was a bit of a nightmare to be honest, but we were lucky to have the room to shift everything around. I don’t understand how they do it in small shops.”

Installation week itself was hectic. “We managed, it was alright.” The installation team barely get a mention – but Jon recorded a video of the process which you can see here. “The worst bit was the building of the new shop – there was a lot of noise with the drills. At some points we had nowhere to work, but it was fine.”

We spent about four days zapping all the stock we had prior to the refit, so when it came to putting stock into the robot, it was just ready to go

In terms of the installation process as a whole, Jon says the most stressful time was the week after commissioning, at the actual point of transferring the processes in the pharmacy from not using the robot, to using the robot. “You’ve got to get it filled – that takes time, because you can only fill it so fast. We had a lot of split boxes of medications, which takes time to get in. And the rest of the dispensary was being finished.”

The staff at Albert Wilde had prepared their customers for the change. “Because of the preparatory work they knew something was happening. We put signs up apologising for the disruption, but hopefully they will be appreciating the benefits now. We get a lot of ‘that was quick’. You can get an electronic script, it takes 30 seconds, one item, bang. If nothing else is happening they haven’t even had time to sit down.”

At Kepple Lane Pharmacy in Garstang, Lancashire, pharmacist Usmaan Hafiz says preparation is vital if you want things to go smoothly. “The support we got about prepping our end before we started really helped a lot. We spent about four days zapping all the stock we had prior to the refit, so when it came to putting stock into the robot, there were no code problems, it was just ready to go.”

Kepple Lane is a big pharmacy – the robot has no fewer than 10 output channels into all areas of unit, and it also serves the onsite dispensing practice too, so typical monthly items are around 25,000. Some overnight shifts were required to load the 11m BD Rowa Vmax before the green light was lit. And with a February install date, the team had organised double prescriptions in December to aid preparations. “We wanted to make sure everything was in the robot from the start,” Usmaan says. “I didn’t have any qualms about it at all, it was excellent”.

For Kepple Lane, the process start to finish took around nine months, with the first discussions the previous July. The design was signed off in October (and included a rethink in which the positioning of the robot was flipped by a full 90 degrees). “We were originally going to go into the ceiling,” says pharmacy manager Jacinta Edgar. “Then we couldn’t, so we looked at going down. That’s what delayed the process. It was more a case of making it fit.”

She admits to having a few sleepless nights in the run up to the installation. “Is this going to work?” But the preparations in place allowed them to continue working around the installation team for the time they were on site. “The process from start to finish was fantastic,” she says. “They arrived when they were due to arrive, the install team was such a slick operation. It came in piece by piece this new shiny kit, and all the staff in the medical centre wanted to know what was going on. There’s only so many times you can ask ‘what’s this, what’s that?’, but they were so helpful in explaining things to us, they never once said ‘just let us get on with it’. They were on the journey with us. Excitement was growing across the four and a half days of the build.”

You can buy a four bedroomed house, or you can buy a robot... but there’s no point having a palace at home if you are only going there to eat and sleep.”

After the build the commissioning team moved in the following week. Training followed. “The whole process, in a busy place like this, we learnt such a lot in such a short time. It took us a week to realise its worth. To try and think now about going back…”

An all over transformation

At Sonichem in Leicester, an extension to the premises was required to take full advantage of their 7.5m long BD Rowa Vmax. After looking at a temporary Portakabin option, they decided on a total transformation of the pharmacy, extension, robot all at the same time. “Where the consultation room is now was the dispensary,” Amit Pattni says, “but we didn’t want to close, it was a lot of struggle but we were interested in the ultimate goal”.

The installation took 10 days including the commissioning. “That was an all night job, each and every line had to be put into the robot, but after that we have never looked back.” For many the sticking point is the investment. “It’s the biggest thing,” Amit says. “You can have a Rolls Royce, you can buy a four bedroomed house, or you can buy a robot. But you spend the majority of your days here, there’s no point having a palace at home if you are only going there to eat and sleep.”

He certainly believes in investing in the pharmacy he runs with his uncle. “My worktop here is probably better than the one I’ve got at home,” he says. “I designed the delivery tube myself, so that the products spread out on the bench when they are delivered so the pharmacist can see exactly what’s there.”

At A+ pharmacy in Bordesley Green, Birmingham, owner Kaleem Ahmed did everything at once too on taking over the business, replacing an old robot with a new one within three days of getting the keys for the pharmacy and moving in from across the road, where previously he’d had a 100-hour pharmacy. Three days later the store fitters arrived from Poland to complete a refit. “It was a manic time in our lives, but everyone was very professional,” he says. “The refit team were excellent.” The smaller BD Rowa Smart installed in Bordesley Green can be built and commissioned in two or three days. “The staff took to it very quickly, even the staff who were here who were not keen originally were soon geared up.”

Next month we’ll look at how robots impact pharmacy operations, but for now, we’ll end with Jacinta Edgar. “The first time it moved I cried my eyes out.  Apparently I was the first crier.”