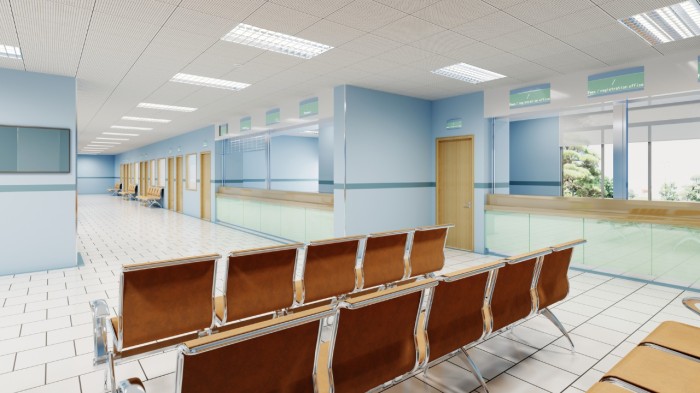 Community pharmacies in health centres had a market advantage in the past. Being next to the GP practice meant the majority of patients collecting prescriptions would get them dispensed there and then. They might even buy something else at the same time. But times have changed, says Leela Barham.

Laville Limited, trading as Britannia Pharmacy, operates 31 branches, one of which is co-located with a GP practice in the Loxford Polyclinic in Ilford. Director Gurdev Channa says NHS Property Services – a Government-owned company – is seeking to increase the rent on the pharmacy from £25,038 a year to £80,000.

Mr Channa says he knows of nine other operators who are affected, so it’s not a one branch issue. The other operators did not respond to requests for comment, but LloydsPharmacy has claimed that past closures have included some driven by unsustainable rents.

Exactly how rents are calculated for community pharmacies co-located with GP surgeries seems like a black box. However, there is guidance that shapes it, although it may be out of date.

A Royal Institution of Chartered Surveyors (RICS) guidance note from 2010 on the valuation of medical centre and surgery premises covers pharmacies within healthcare developments.According to Mr Channa, this guidance was archived in 2015 but appears to have been brought back into circulation some time in 2018 and has informed the rent increase NHS Property Services is seeking on the branch in the Loxford Polyclinic.

The guidance makes it clear that location of the premises shapes rent and is also driven by a host of other factors. Some of these won’t change over time – or at least they are unlikely to have changed in the short and medium term – such as the provision of a consulting room: if there was one in 2010, it’s likely to still be there in 2022.

Others can change, including the likely number of prescriptions issued by the associated GP practice, which is related to patient list size and changes in demography. RICS also refers to “the spatial relationship between the surgery and pharmacy” – posing the question “to what extent does the pharmacy benefit from the surgery’s ‘pedestrian flow’?” – and the extent to which electronic prescribing is possible between the practice and the co-located pharmacy.

So how have things changed in the 12 years since that guidance was published?

The NHS Digital appointments in general practice dashboard (below) shows that of 27 million appointments delivered in November 2019, including appointments with GPs and nurses, 80.3 per cent were face-to-face. The most recent data, for April 2022, saw a fall to 63 per cent of the 24m appointments. So, it certainly looks like ‘pedestrian flow’ in RICS terms has dropped, although as ever with the NHS, there will be local variation. 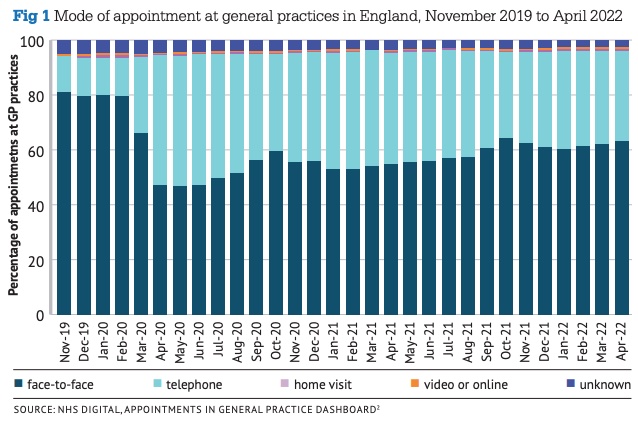 It’s tough to know what the ‘new normal’ is. Covid-19 has played a role in shaping how patients access general practice, but there is evidence of a shift towards telephone versus face-to-face consultations since 2010. While passing trade is still likely to play a role in the commercial viability of community pharmacies, it has gone down since 2010.

This is due to factors that don’t relate to the decisions made by those running those branches. A hunch it may be, but it’s doubtful that even with investment to provide a more attractive offer branches could do enough on their own to offset this.

A national roll out of electronic prescribing was announced by the Government in October 2019, although by that time, around 70 per cent of all prescriptions were already prescribed and dispensed via the Electronic Prescription Service (EPS).

The announcement trumpeted increased efficiency to the tune of £300m by 2021. Savings like this were generated, in part, from “eliminating the need for patients to pick up repeat prescriptions from their GP.”

EPS affects footfall because patients can choose the pharmacy where their prescriptions are sent. Desk research didn’t find any handy stats on patients’ decisions on where to collect and on what basis, but convenience may well be a major factor. And convenience will depend upon the patients’ – or the person who collects their prescriptions on their behalf – circumstances, such as where they work or where they shop for groceries as they may pick up a prescription at the same time. Some will have a long-standing relationship with a community pharmacist. Some will just stick with where they’ve always gone.

Data from the NHS Business Services Authority can be used to track where prescriptions from specific GP practices end up, but there’s no flag for practices that are co-located. A list of co-located community pharmacies could be put together to unpick just how valuable the positioning is, at least when it comes to dispensing for the practice that’s next door.

It’s reasonable to suggest, however, that even without the detail, like a shift away from face-to-face consults, EPS is an external factor shaping the commercial viability of a community pharmacy.

Time for an update

Today’s community pharmacies are clearly operating in a different world to that of 2010. Gurdev Channa points to a drop in dispensing by the Loxford branch from 80 per cent of the prescriptions issued by the co-located practice more than 12 years ago, to 32 per cent now.

RICS has told P3pharmacy that it is “not yet in the process of updating [the 2010] guidance, though we are looking at initiating an update later this year.” Just when that will translate into new guidance is unknown.

RICS states: “We will be able to advise on publication timescales once consultation on potential changes has been conducted.” So all stakeholders – community pharmacy included – will have a chance to have their say as and when RICS launches its public consultation.

A number of bodies in community pharmacy have drawn attention to the issue. The National Pharmacy Association has warned about unaffordable health centre rents and the Association of Independent Multiple pharmacies has urged contractors to sign a letter calling for a more realistic approach to calculating rents.

NHS Property Services is therefore under some pressure to lower rent increases. That might hurt it, however. Its annual report and accounts show that it was itself in the red for the financial year 2021/22.

That’s cold comfort to community pharmacy though and does not side-step the need for an approach to rent setting that reflects today’s market, where commercial opportunities are less likely to stem from foot traffic.

NHS Property Services did not respond to a request for comments from P3pharmacy, nor did the Department of Health and Social Care or NHS England.

Health minister Maria Caulfield has said the Department of Health and Social Care is working with the NHS to ensure rents are applied to community pharmacies in a “fair and transparent” way.

Ms Caulfield’s remarks were in response to a written question from shadow health and social care secretary Feryal Clark, who had asked whether the department has “had discussions with the NHS Property Service on the impact of increasing rents on community pharmacies”.