“The journey was the culmination of three months’ work. What had been going on before – with people sending boxes in vans and car boots - had been amateurish and ineffective. The Medicines to Ukraine scheme the other end of the scale.

“Donations from pharmacists and their patients across the continent was used to buy a test consignment of nearly £200,000 worth of medicines and blood products from big, modern warehouses that specialise in hospital medicines. Cold chain processes, FMD, end to end sealed transportation systems, giving clinicians confidence that they could put what we transported into the patients they were treating. As pharmacists, we take all this for granted, but it’s not something that's out there in wider society, or even for people working in healthcare.

“Our job, therefore, was to establish a long-term supply programme that would keep the medicines coming for months to come. We wanted to be able to look senior officials and senior clinicians on the Ukrainian side in the eye when we told them what we had organised. The photographs of what was going on at the other end had generated a lot of confidence and opened doors in the lead up to our visit. There was a sense of stuff happening behind the scenes that suggested everyone was desperate for this to be a success.

“Our charity partner, Caritas, really know how to get across the border – they are going in and out of Ukraine two or three times a week, delivering wider humanitarian aid. They use roads we wouldn't have been able to use if we had gone there as enthusiasts. They had connections into the Ukrainian government. That would prove to be highly advantageous.

“While there was lots of goodwill and we’d planned it all, there was still a sense of foreboding as we travelled along the lane through the pine forest, on what appeared to be some kind of fast track channel – there was a queue of lorries 20 miles long on the main route in (and out). Other vehicles on the route had blacked out windows. We’d left our mobile phones and laptops behind due to the potential for the hostile monitoring.

“When we got to the border, it was obvious we were expected. They waved us through in eight minutes and wished us luck. On the other side, there was tension in the air. We were in a country that was at war. 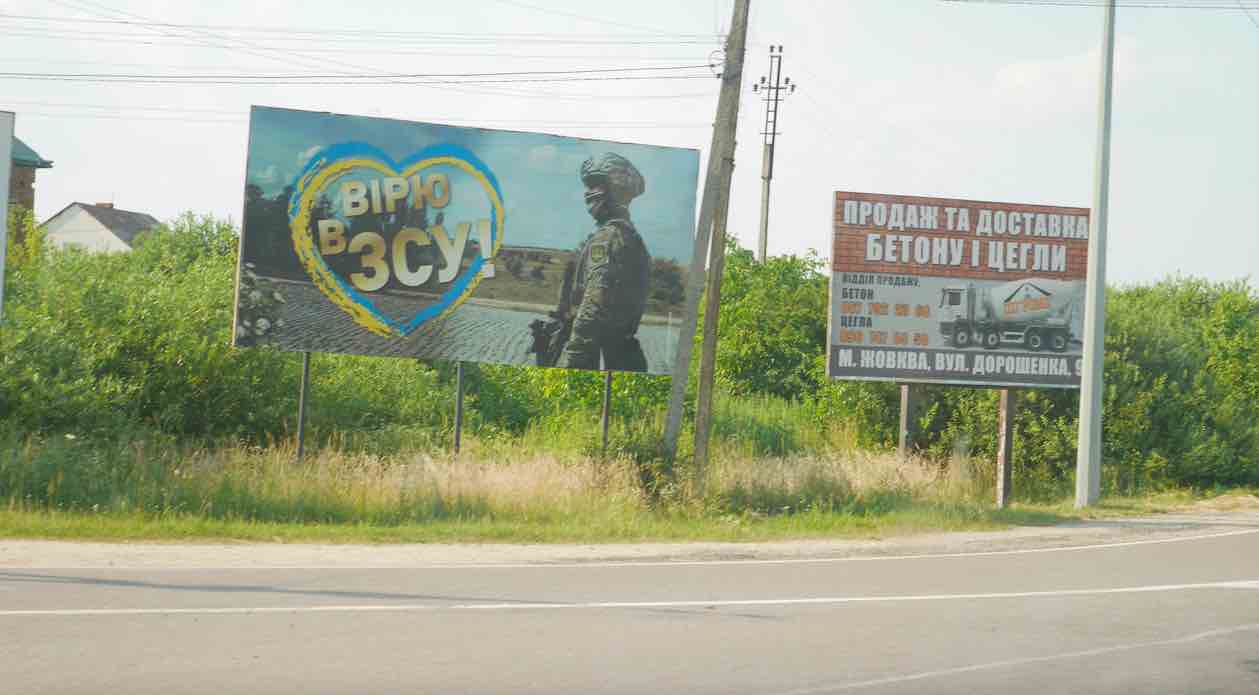 Morale boosters by the roadside (above), while destroyed Russian military hardware is left rusting in the streets (top). Lots of meetings (below) in a packed agenda, this one with the head of the church in Ukraine, the equivalent of the Archbishop of Canterbury

“We got to a hotel. At 10pm the lights went out, but they flicked on the generator and pulled the curtains across. That's when we got the lecture from the officials that had gathered to accompany us on our trip – the itinerary, the places they were desperate for us to see, the many people they wanted us to talk to.

“My mission was to get these guys to buy into our plan, but they were clearly desperate to make sure we were 100 per cent happy and on board with support for them. And there was no danger of that evaporating as far as we were concerned.

“Inevitably, in the Eastern European way, after dinner were the toasts. But while we might toast somebody's birthday; these were toasts to fundamental principles, like freedom and liberty, and children being able to live in a society where the rule of law was observed. It was very moving and humbling to realise how much we take for granted. They desperately want to have an effective democracy. They want their kids to wake up in the morning and live the rest of their lives in a free country.

“They wouldn't allow us to put our hands in our pockets, either. At one point on the trip, I wanted to buy my kids some pro-Ukrainian T shirts from a market stall. But when the Ukrainian-speaking minder explained that we were the guys that had come over to try and organise medicines for Ukraine, she wouldn't take the money. I was desperately embarrassed, but what can you do? It was noticeable throughout how extraordinarily grateful Ukrainian people are for all the help from West.

“The meetings on our whirlwind tour started the next day. As part of the way the scheme was set up, we needed robust memorandums of understanding (MOUs) signed. We would be sending some extremely valuable items. The first consignment was just shy of £200,000. We were asking for photographs of medicines unloaded in hospitals and sign off by a senior clinician.

“The MOUs had to be done in triplicate – in English, the international language that's used, in Ukrainian, and then whatever language the wholesalers might use. We'd never met these civil servants before, but they were signing the MOUs as we were walking out the door. And I’ve never seen senior people in health care and the military say they're going to take personal responsibility, not just for signing the MOU, but for making sure it’s complied with. 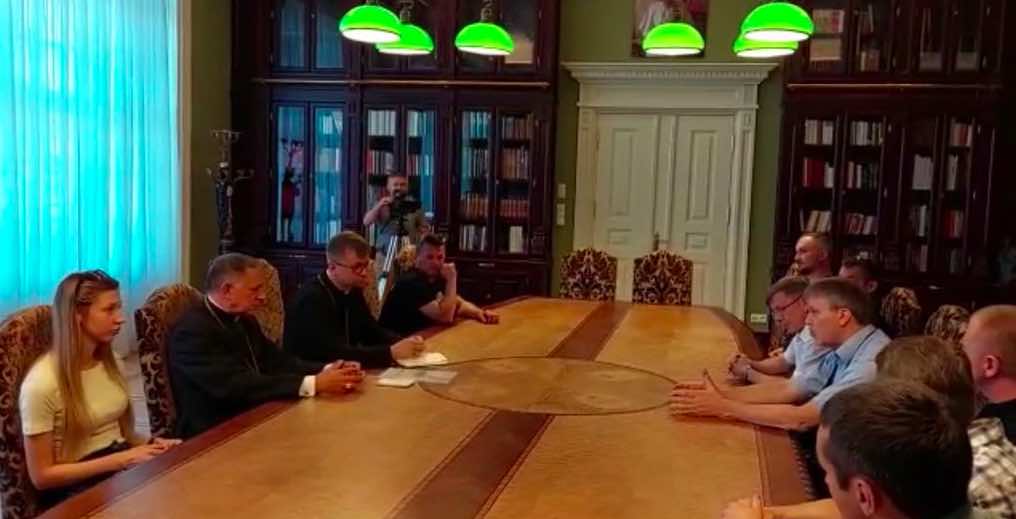 “The meetings with clinicians in the hospitals and military hospitals are a challenge to describe. They had heard about our campaign – posters had been displayed in pharmacies in Croatia for over a month. And they promptly gave us a lecture about receiving lorryloads of short-dated paracetamol tablets, which they did not need.

“They do not want a push system, in which medicines and equipment someone else doesn’t need, is sent to Ukraine. They wanted a pull system, where they could place specific orders for desperately needed items, which were then delivered where they were needed most. That’s exactly what our scheme is designed to do.

“We could only be in awe of their professionalism, passion and patriotism. With limited resources, and facing extraordinary challenges, they equate treating patients with playing a role in victory against the aggressor. And they keep going, seven days a week.

“The treatment they are providing has changed dramatically of course – multiple blast injuries, amputations, organ damage from shrapnel. And all the soldiers in the military hospital want to do, is get back to the front, resolute in their belief that they are going to be victorious and that they'll end up with a free and peaceful country.

“They largely credit the West with enabling them to get to that place. They say: we've got the weapons, we've got the food, we've got the medicines, but the moral support is just as important. The validation from free societies all around the world is the petrol that we need in our tank. It’s very humbling.

““It was interesting hearing their clinical concerns. I wasn't the only pharmacist on the trip and while I might not be patient facing every day, they opened up because we were able to talk as fellow clinicians. I can’t imagine, say, DHL, being able to do that.

“The children’s hospital is desperate for some expertise around antimicrobial resistance strategy. For somebody who might be prepared to go over for a week or two weeks to give them a helicopter view. Bringing soldiers and civilians injured in the East into the centre of the country is rapidly accelerating the rate at which antimicrobial resistance becomes a big problem. One senior clinician thinks they may have just a few months before they can no longer undertake major surgery.

“Among the other requests made to us was for half a dozen surgeons who specialise in blast injuries – they need training; they’re improvising at the moment. One of the humanitarian experts who came with us, who has worked in Afghanistan, Haiti, Nepal, is stepping up to the plate to see if he can find these people. Given the difficulties in getting there, the links we've developed with our charity partners could be useful.

“I hesitated to go on the ward visit in the children’s hospital, but they were determined that we did. It’s hard to articulate how upsetting some of that is. There was one child who they were about to operate on for a third time. No hands, a leg amputated. They'd seen this £150,000 machine on the internet the American army are using to transport, under pressure, fluids, antibiotics and so on into a body cavity, with dramatically improved response rates. The've literally created one with bits of plastic tubing, medical sponges, some medical wrapping and glue.

“On the receiving end was this little boy who couldn't have been older than 12, parts of his body blown away. And if he was lucky enough to survive they’d have to break the news to him that he no longer had a mum or dad. What do you say about something like that?

“It comes back to you when you get home. You hear an innocuous conversation about, say, a leaky washing machine, and it reminds you that there are people in dire trouble, saving people's lives while their own are hanging on a thread. They are people like us, senior people in their profession, clinicians. They save people’s lives and they aren’t able to go home in the way we do. You do feel a bit of a fraud coming back to a normal life.

“What I did learn, however, is that this scheme is going to work, and that there is a role for pharmacists in it. Everywhere we went, people, even the big charity organisations, were saying they've always had a problem with ‘the medicines thing’.

“That’s not just a lesson in Ukraine. There's a real job for us pharmacists to make sure that our medicines expertise is used in those situations pretty much anywhere in the world.”

How you can help

“Put the posters up (UK version below). We're positioning pharmacy as a solution to the problem. Go on the website and find out what the scheme is about. Enthusiastic members of the public will want to know more. Encourage people to help.

“Don't send medicines. Don't do it, because it largely ends up being wasted.

“Use the opportunity to talk to patients about medicines. That's what we do as pharmacists, whether we're supplying medicines locally, or to the other side of Ukraine. Let's show people what being a pharmacist is all about. 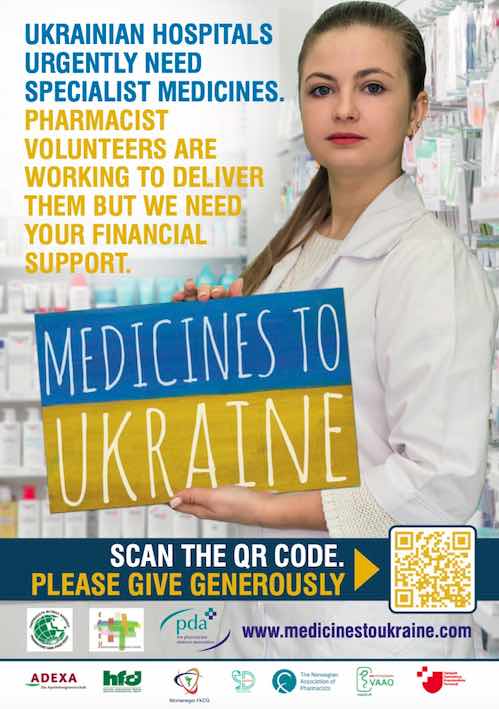