Engaging with local politicians and councillors

Engaging with local politicians and councillors

Donâ€™t stop talking. The funding cuts in England give community pharmacy all the more reason to work on developing good relationships with local politicians and councillors. 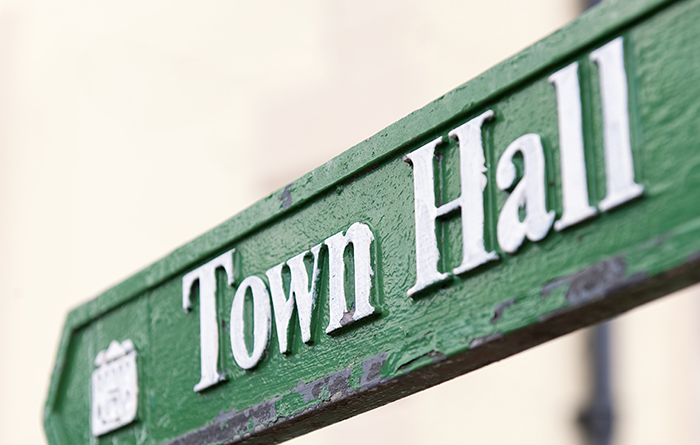 Politics and community pharmacy have not exactly been skipping down the road hand in hand of late. PSNC has rejected the Department of Healthâ€™s imposed funding package for 2016/17, which will reduce funding for pharmacies in England from December 2016 to March 2017 by 12% on average compared to current levels, to Â£2.687 billion; and reduce funding for 2017-18 by 7.4% compared to current levels, to set funding at Â£2.592 billion for that year.

PSNC says negotiations over recent months â€œwere not characterised by collaborative workingâ€ but presented by the Department as â€œa fait accompliâ€, and Michael Dugher, a Labour MP who has led the campaign against the cuts in Parliament, agrees. He said: â€œMinisters promised they would listen and consult widely on their planned cost-cutting, but the government is set to force through [the] brutal package.â€

Although it may feels like no one is listening, the profession has had a lot of engagement with local MPs on this issue, as well as pressure on a national level â€“ and this current state of affairs is certainly no reason to stop the conversation between pharmacy and politicians.

The benefits of talking

At times like these it is more important than ever to keep talking and building relationships with your local political representatives, to ensure that the voice of pharmacy is heard and government policy reflects the priorities, concerns and aspirations of pharmacists.

â€œEngaging with politicians is a key way for contractors and their teams to demonstrate the value and potential of the community pharmacy networkâ€, says Zoe Smeaton, head of communications and public affairs at PSNC. â€œPoliticians can act as advocates for the sector, promoting pharmacy to the public and influencing the policy decisions made by ministers and the NHS. Opposition MPs can also help to put political pressure on the government to press it to support community pharmacy, and local councillors can help shape local pharmacy policies and decisions.â€

Chris Ford, public affairs and communications manager at Pharmacy Voice, is very used to engaging with key stakeholders in Westminster and Whitehall, but he is also familiar with the other side of the coin. Last year he was elected as a councillor on Chiltern District Council, and he is also a parish councillor for Chalfont St Peter Parish Council.

He says there are benefits for both sides: â€œContractors benefit because, as a key component of the community delivering services on which community depends, they can help councillors and MPs better understand the value of what they do, and this then equips MPs with the information they need to effectively represent pharmacy. Once they know the challenges pharmacies are facing, most MPs are more mindful to help.â€

As a longstanding leader and innovator in community pharmacy, Ash Soni has extensive experience of engaging with councillors and politicians at all levels, and agrees that engagement is vital because â€œpeople only know what they knowâ€.

â€œLocal councillors get to know the local population at a local level, and they are also probably a client of their local pharmacy so have an idea of what pharmacy can offer, but itâ€™s still worth telling them more about what you can do,â€ Mr Soni explains. â€œAnd when it comes to local MPs, they have some influence with CCGs and local authorities around what they are doing to utilise pharmacies so they can be a key partner for you. There are some 600 MPs and they talk to each other, so if you can influence them and they talk to colleagues, you create an opportunity for building a force on behalf of pharmacy â€“ as we have seen with the two million signatures on the funding cuts petition.â€

A foot in the door

If you donâ€™t already have a connection, whatâ€™s the best way of making contact and then building a relationship with your local political representatives?

Ms Smeaton says it starts with picking the right person: â€œContractors should look for their constituency MP or the pharmacyâ€™s local (ward) councillor. If you live in a different constituency to your pharmacy, start any correspondence with â€˜my pharmacy provides NHS care to the residents of [name of constituency] and employs five [constituency] residentsâ€™ to make sure the MP knows the issue is relevant to their constituents. Be sure to include your contact details, including an email address, in all communications with politicians.

â€œIt is then a good idea to speak to the local LPC to see what contact they have had with the politician and ensure that your efforts will support their ongoing work and relationships.â€ The LPC may be able to offer advice on key messages or other ways in which you help with local lobbying efforts, she advises.
But donâ€™t just wait for a problem to arise before you start making connections. Graham Phillips, director and superintendent pharmacist of Manor Pharmacy Group in Hertfordshire, says heâ€™s worked on building relationships with his local MPs and councillors over many years, â€œrather than simply waiting until a rainy day to make contact with themâ€.

This first contact can start small. â€œJust invite them to your pharmacy,â€ says Mr Soni. â€œPoliticians are delighted to have their picture taken for the local paper showing their support for their local community.â€

Jane Devenish, NHS standards & services pharmacist at Well Pharmacy, suggests combining the visit with a health check or flu vaccination â€œto give you the opportunity to demonstrate the important work that you do to support the local community. All MPs have a constituency office in the local area, which makes it fairly easy to invite them into branch personally, or to send an invitation for their attention. Many politicians are also active on social media, so engaging via social channels can also help to build up a relationship and keep in touch.â€ The Royal Pharmaceutical Society is also happy to arrange pharmacy visits for MPs to engage them directly with the work pharmacists do day-to-day, and the Societyâ€™s Public Affairs team can provide resources and guidance to members for arranging their own visits, available at rpharms.com/talking-to-government/get-involved.asp

If you plan to start a conversation with your local politicians, think about what information and insights they need from you in order to help. It might be that they need background information on exactly what the Governmentâ€™s plans are for pharmacy, and you can couple that with examples of times when the care provided by your pharmacy team has made a real difference to patients.

If they want to get involved and help, it is likely they will need some key facts or statistics that they can use in letters, questions or debates. PSNCâ€™s infographic on the recent PwC report on the value of community pharmacy services provides a good starting point and can be downloaded from the resources section at: psnc.org.uk/valueofpharmacy. A range of other useful resources and briefing materials for MPs are also available to download from: psnc.org.uk/campaign.

Susanne Cameron-Nielsen, head of external relations at RPS Scotland, says the key to getting the most out of any interaction is to be mindful of how you can add value to the conversation: â€œFocus on the person as an individual and what their specific areas of interest are. The more you can tailor your contact, the more it can affect policy making â€“ send them stuff you think they might be interested in whenever you see it.â€

It takes thought and effort to nurture these kinds of relationships, but it can be time well spent. When the pharmacy cuts were first discussed, Mr Phillips emailed his local council town clerk at 9pm on a Friday evening and received a response at 10pm inviting him to come and talk at the next council meeting.

â€œI had five minutes to explain the work of community pharmacy and what the cuts would mean for us, and by the end of it they said theyâ€™d do whatever we needed them to do to help,â€ he says. â€œEvery single community pharmacist could do this, but they donâ€™t â€“ or maybe they just donâ€™t realise how to.â€

Mr Soni also reports positive results from interactions with his local authority: â€œWe havenâ€™t had any services decommissioned because weâ€™ve got to know them over the years on a first name basis. They see the value of what these services are, so they trust what we are telling them.â€ However, he adds a caveat:

â€œRemember to recognise the council and civil service staff â€“ such as the directors of adult social services and public health â€“ if you want to influence outcomes, as they are making the day-to-day decisions.â€

Mr Ford suggests that pharmacists should also consider the opportunity to influence change from within: â€œI know they are very busy people but Iâ€™m a passionate believer that more pharmacists should be getting involved in local government. Pharmacists are uniquely placed at the heart of the community, so what better person to be a councillor and demonstrate the breadth and depth of what pharmacy does.â€

MPs, like community pharmacists, are busy people, but many pharmacists have been successful in organising successful visits that allow them the opportunity to talk about their work in detail. 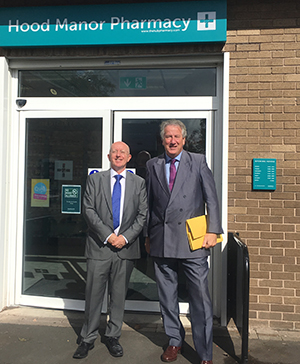 In September, Steve Jeffers, ceo of the Hub pharmacy, invited David Mowat, MP for Warrington South and minister with responsibility for pharmacy, to the groupâ€™s Hood Manor Pharmacy (pictured right).

Following the visit Mr Jeffers said: â€œI think it was helpful for the minister to see how one of his local community pharmacies operates and how pharmacy is now offering to play a wider role in patient care over the coming years via the proposals contained within the Community Pharmacy Forward View.â€

Jenny Rathbone MP visits Cardiff pharmacy
Someone who has needed little convincing about the value of community pharmacy is Welsh Assembly member (Labour) for the Cardiff Central constituency, and chair of the Cross Party Group on Diabetes, Jenny Rathbone.

Prior to the Welsh elections in May, RPS Wales arranged a visit for her to Clifton Pharmacy in Cardiff to meet owner and community pharmacist Sudhir Sehrawat â€“ who is also one of RPS Wales Board Members.

â€œIâ€™m a passionate supporter of the NHS and have served on a health trust, and chaired independent NHS complaints panels, so I know how things ought to work,â€ she says. â€œEngaging with community pharmacy is not new to me, as Iâ€™ve been involved in trying to improve primary care for at least 15 years, but I still think pharmacists are an underused resource. A big issue for me at the moment is the Individual Health Record (IHR), because we need a more joined up facility for the sharing of notes â€“ which Iâ€™ve discussed with the BMA â€“ but this can and should be resolved at local level.â€

For more information on contacting local politicians, speak to your LPC or read PSNCâ€™s campaigning guidance for LPCs.

PSNCâ€™s key campaign messages are still useful and may help you in drafting a letter to your MP, or you could look at the NPAâ€™s lobbying tool, available from lobby.supportyourlocalpharmacy.org

At times like these it is more important than ever to keep talking with your local politicians, to ensure the voice of pharmacy is heard