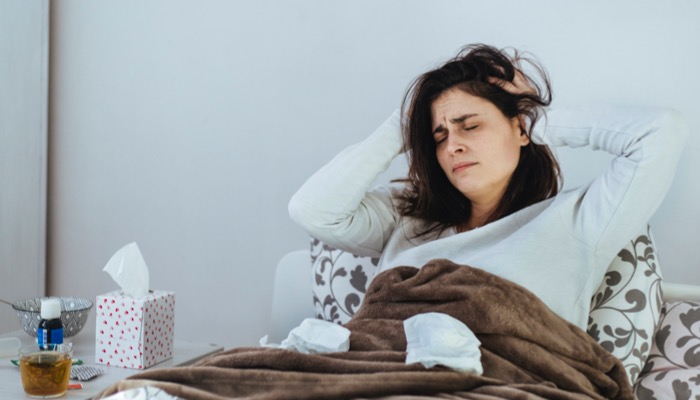 Flu kills an average of 8,000 people a year and the vaccination programme remains our best defence against the virus. This year 25 million people in England were offered the vaccine free by the NHS and for the first time, the nasal spray vaccine was offered to all primary school age children, which will protect an extra 600,000 children. A new campaign aimed at health and social care workers was launched this season to encourage more of them to get vaccinated to protect their patients and themselves.

A wider range of vaccines is available this year to offer better protection. In addition to the adjuvanted vaccine offered to over-65s last year, a new cell-based vaccine that protects against four strains of flu became available this season for the 65-plus group and those under 65 with underlying medical conditions.

Last winter there were 1,692 deaths associated with flu in England and 5,505 people were hospitalised. Last season, pharmacies delivered 1.4 million flu vaccines, says PSNC. Uptake of the vaccine last year was:

For those most at risk from flu, the long-term uptake target is a minimum of 75 per cent, recommended by the World Health Organization. For 2019/20, the vaccine uptake targets were:

This season, PSNC secured an increased vaccine fee of £9.58 per vaccine and pharmacists were no longer required to ask patients to complete a questionnaire after the service.

NHS Digital has expanded the Message Exchange for Social Care and Health (MESH) system, used to transfer information from pathology labs etc to hospitals and GPs to include community pharmacy. Pinnacle Health Partnership has worked with NHS Digital to make this available for the flu service this year. TPP worked with Pinnacle and NHS Digital in a test in the Leeds area of its SystmOne GP clinical system in October, with national roll-out from November.

“After five years of being exhorted by everyone to be able to ‘write to the GP record’ we now can,” says Gary Warner. “EMIS are now working on the same pathway with Pinnacle and NHS Digital for the EMIS web clinical system to achieve roll-out before the end of this season, so we are all ready for next year,” says Gary Warner. “This isn’t just about PharmOutcomes either as we’ve supported Sonar to come along. They should be good to go soon too.”

The 2018/19 season had some supply issues, but to date the 2019/20 uptake figures have already exceeded numbers of any previous year, says Gary Warner, chair of PSNC’s service development subcommittee and managing partner at Pinnacle Health Partnership, which runs the PharmOutcomes data collection service for the flu vaccine programme. Combined data from PharmOutcomes and Sonar on the number of flu vaccinations - over 1.4 million and counting- administered as part of the Flu Vaccination Service is shown in Figure 1 (data to December 11).

Source: PSNC 12 December 2019 Note: some contractors are unable to use, or have decided not to use, these electronic systems to record administration. The total number of vaccines administered by community pharmacists under this Service in 2019/20 will be higher than the number recorded in the table/graph

“There have been 20 per cent more vaccinations so far than there had been by this time last year,” says Mr Warner (end w/c 9 December). Trends in the data for vaccine uptake this season (data from PharmOutcomes is included in Figures 2-4, all to 17 December) show:

Gary Warner comments: “Although the number of over 65s, which are seen as the easiest cohort, has risen, their proportion of the total has gone down this year in pharmacy. To me, that means the proportion of under 65s in at risk groups has risen. These are the hardest group to achieve beneficial rates (the WHO totals are woeful).

“The other hard group to reach are pregnant women and it’s one of the areas where we’ve been able to demonstrate statistically significant impact. They are rising not only to within a whisker of double the number from last year, but also as a greater proportion of the total.”

Looking at the community pharmacy flu service in general, he says the future seems to be secure at the moment. “Collaborative working between pharmacy and general practice is improving. While uptake in at risk groups continues to grow, the fall in adults in receipt of carer’s allowance indicates there is more that can be done to target this group. And we have finally solved the problem of informing  GPs about vaccinations, while requiring the minimum effort by surgery teams to update their records.

“We are working with the NHS Business Services Authority to automate the vaccination claims through its Manage Your Service portal through an API [interface] we designed together for the CPCS service.”

Views from the front line

How was this year’s flu vaccination programme for your pharmacy? We spoke to a cross-section to find out. 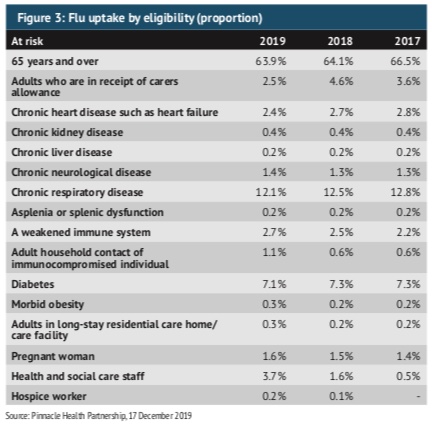 At Shaftesbury pharmacy in Harrow, pharmacist Lila Thakerar is pleased with this season’s uptake. “This has been our best year so far,” she says. “We did something new this season to achieve this outcome. We used a phone company to send out texts to all our patients eligible for a free vaccine and invited them to contact us to make an appointment. Within minutes, the replies were flooding through and it’s been incredibly successful. This is what GPs now do for eligible patients, so we thought as pharmacists offering an NHS service, can’t we do the same?”

Ms Thakerar says they reached more eligible patients this year and increased their number of private vaccines too, from eight to 10 per cent of the total last year up to 12 to 15 per cent this year.

Alphega pharmacy member Samina Khan, at Pateley Bridge Pharmacy in Harrogate, says: “We’ve had great success this year. Uptake for both private and NHS customers has tripled from last year. We started advertising in August by attaching the Alphega flu vaccine flyer to every eligible patient prescription bag as well as letting them know verbally. I also worked with the local newspaper to put a mention of our walk-in service in its local events and news. I also got in touch with local schools and businesses, which got a good response.”

She says about 80 per cent of the vaccines given were for eligible patients.

Ade Williams at Bedminster Pharmacy in Bristol also reports a successful season. “Stock arriving on time really helped us to plan and make things go well,” he says. “Uptake increased as lots of patients value the convenience of our service, but also GP surgeries had similar stock issues to what we faced last year, so they referred patients to us.

“We got involved in the NHS campaign on radio and local print media. We also had local political figures visit us to get their flu vaccination and helped the CCG produce YouTube videos for Help Us Help You.” About 75 per cent of the pharmacy’s vaccinations were for eligible groups this year.

Improve your cold and flu category

Maximise the remainder of the winter season with tips from our pharmacist experts.

“We’ve had more customers coming to our pharmacy this season for remedies, and that’s thanks to new guidelines about treating minor ailments in north-west London,” says Ms Thakerer. “If customers don’t have a bacterial infection, there is nothing a GP can prescribe for cold or flu, so the advice is to buy a remedy for symptom relief.” Best sellers in her pharmacy are decongestants and combination remedies.

At Pateley Bridge Pharmacy, sales have been good so far this season. “Our biggest sellers are cough medicines, especially Benylin, but also popular are Day & Night Nurse capsules as well as Sudafed and Lemsip,” says Ms Khan.

Rebecca Collison, Ricola senior marketing manager, notes that there has been a reduction in sales of extra-strength throat care products, and those with a strong menthol flavour. “We’ve seen greater consumer demand for products that contain natural ingredients,” she adds.

Jakemans brand manager Elizabeth Hughes-Gapper, says: “Over the past year, retail has seen a 2.4 per cent sales increase for cough, cold and flu solutions. With coughs remaining the highest incidences of all the cold and flu symptoms, affecting 1.2 per cent of the population last year, there is an increasing reason for pharmacies to offer remedies.”Jakemans is supporting the season with a £1.9 million spend to drive sales and awareness, including TV advertising and PR.

Says Olbas brand manager Nikki Banwell: “Nasal decongestant products have seen value growth for the second consecutive year (3.1 per cent). Research has shown that well-known brands are trusted by customers, with a high proportion preferring to use branded products.” Olbas is being supported with TV advertising and a PR campaign this season.

Mr Williams says his pharmacy is actively promoting self care and antibiotic guardianship. “This means people are asking for remedies to relieve symptoms,” he says. “We are finding the push for antibiotics is most often to seek relief and not so much that people think they have an infection.” 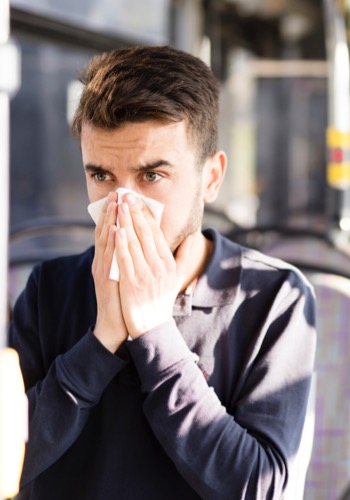 Two thirds of people see their public transport commute as a major risk to their catching a winter illness. A study of 2,000 Brits for Jakemans has revealed 66 per cent are worried about catching a sore throat or cough on their commute, with the figure among London commuters even higher (77 per cent).

Some 82 per cent of people said they had a cough or sore throat last winter. Over a third said it is very likely this was due to their form of travel. According to the research, over half (54 per cent) believe they are more likely to catch a sore throat or cough on public transport than working with children, with 41 per cent saying they’ve been coughed on during their commute.

Three in 10 believe travelling on the tube is likely to make them catch a winter illness, while over half said buses increase their chances. This is put down to lack of fresh air, germs over handrails and seats, and being in close proximity to strangers, according to over half of respondents.

The findings should come as no surprise as a massive 72 per cent of commuters admit they don’t avoid public transport when they have a winter illness and 60 per cent haven’t taken a day off work. Of those who do continue with their daily travel while unwell, over a third feel ‘self-conscious’ and a quarter ‘guilty’ for doing so.

When sat next to someone on transport who is ill, two in five have washed their hands with sanitiser to avoid the germs and 37 per cent have moved seats or turned away from the person. Almost half (45 per cent) wished they didn’t have to use public transport and a third said doing so leaves them feeling dirty and affects their mood for the rest of the day.

Hygiene expert Lisa Ackerley’s five top tips for commuters can be found on an infographic, which is available, along with other supporting material via www.jakemans.com 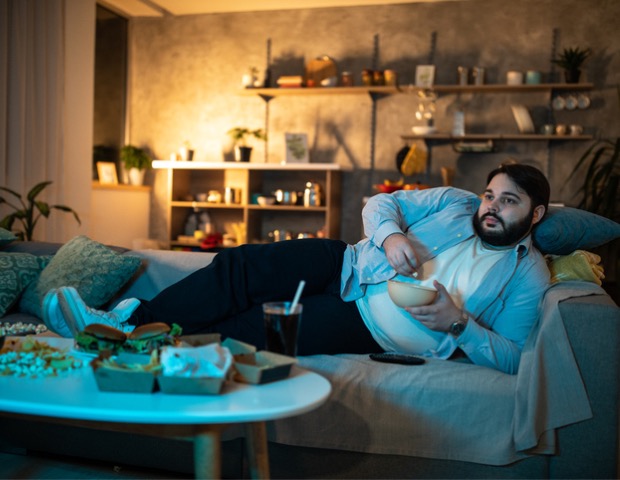 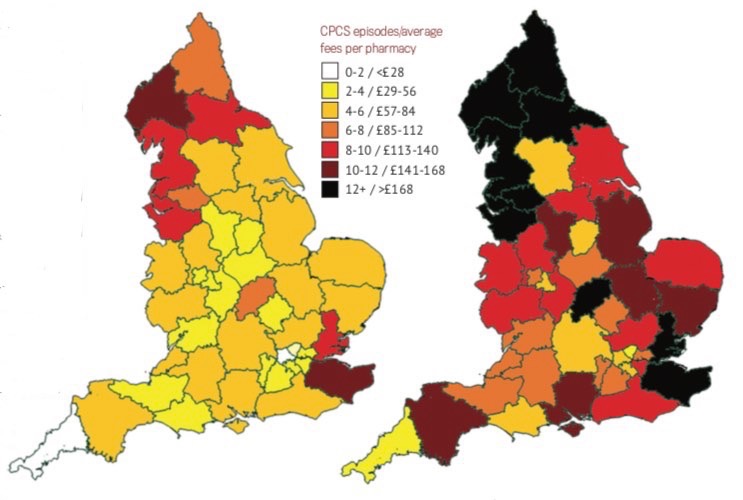