The community pharmacy landscape in England, the rise of distance selling pharmacies in terms of outlet and prescription volume, the market share of different kinds of distributors and an apparent downturn in the number of generics subject to concessionary pricing were all covered in a wide ranging presentation at the Sigma Conference last month from Carol Alexandre, vice-president global services at IQVIA. Here are the highlights.

The hospital sector is currently driving the UK medicines market, with sales up 12.4 per cent year on year at £11.3bn. Community pharmacy purchases declined by 2.3 per cent in value terms to £11.2bn. In volume terms, the hospital market, at 200m packs, growing at 1.7 per cent year on year, still comprises only 10 per cent of packs (community pharmacy 1.9 billion packs, down 0.6 per cent). 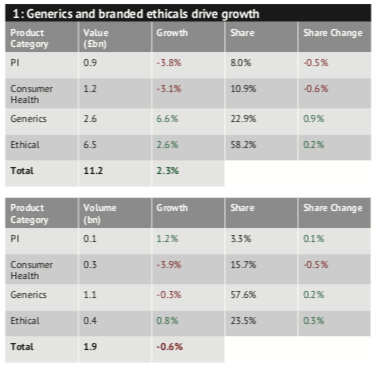 Drilling down into the community pharmacy sector, data from wholesalers shows generics and branded ethicals driving year on year MAT (moving annual total) value growth (Table 1). The 6 per cent value increase in the generics sector is related to Category M price increases last August, rather than volume. The consumer health product decline of around 3 per cent reflects the impact in prescribing guidelines.

Value growth in sales of ethicals is led by anti-thrombotic agents
(up £113.4m to £812.6m) and diabetes drugs (up £80.3m to £1,073m). The next three classes in value growth terms are antirheumatics, ophthalmologicals and renin-angiotensin system drugs.

In the wholesale market for community pharmacy purchases, shortliners are gaining market share at the expense of national full line wholesalers and manufacturers’ direct supply (Table 2). 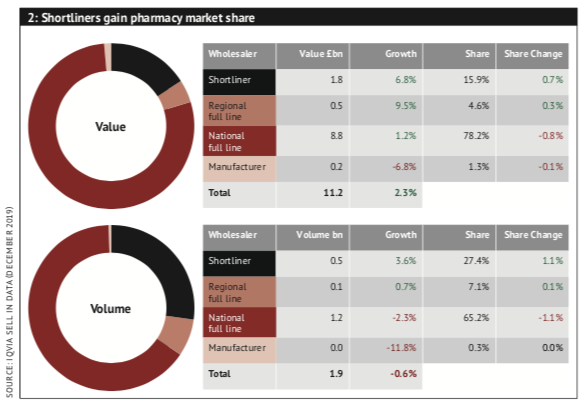 NHS figures show that the number of pharmacies in England fell by 94 in the year to September 2019, with the independent sector the only one to show an increase in numbers (Table 3). Just over one billion items were dispensed in the same period, up 0.7 per cent. 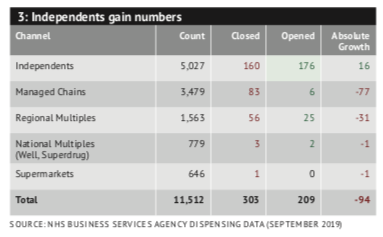 In terms of market segments, independents had the strongest performance, with total volume growth outstripping the market at 3.5 per cent for a share of 44 per cent, although those figures do include the likes of Pharmacy2U. Regional multiples, despite divesting 2 per cent of stores, also outperformed the market, with a 2.1 per cent increase in items for a 14.2 per cent share. These gains were at the expense of the managed chains (Boots, Lloydspharmacy and Rowlands) who, as well as divesting themselves of 77 stores, lost 3.6 per cent of prescriptions year on year, and shed 1.4 per cent share, down to 31.5 per cent.

Distance selling pharmacies (DSPs), regardless of ownership, have seen good growth in item numbers (Table 4). Independent bricks and mortar pharmacies are outperforming overall market growth of 0.7 per cent at 2.6 per cent. Pharmacy2U continues to grow rapidly, with item numbers up 57 per cent in the year to September 2019. 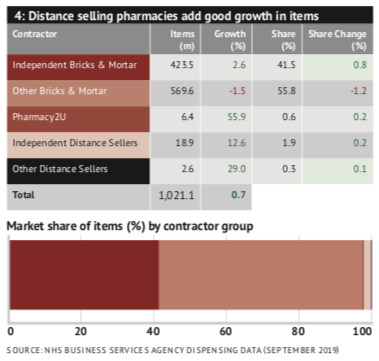 Growth in the number of DSPs seems to have slowed almost to a standstill, increasing by only four during the year to reach a total of 349. This slowdown does disguise some churn, with 38 openings and 34 closures. The vast majority of DSPs are classed by IQVIA as independents (322), with six in the managed chains, 17 operated by regional multiples, and the remaining four in national multiples (IQVIA’s classification of Well and Superdrug). No distance selling pharmacies are run by supermarkets.

IQVIA takes the PSNC list of concessionary prices each month to look at trends. The MAT volume at December 2019 was 53.5m packs sold at concessionary prices, with 9.2m in the final quarter of the year and 3.1m in the last month. Turning that into value, the monthly trends suggest a decreasing value contribution of product packs granted a concessionary price over the past year (Table 5).

The number of product packs where concessionary prices were granted dropped in the middle of the year, from a 2019 peak of 109 in March to a low of 44 packs in August. Numbers were rising again towards the end of the year, to 75 in December. 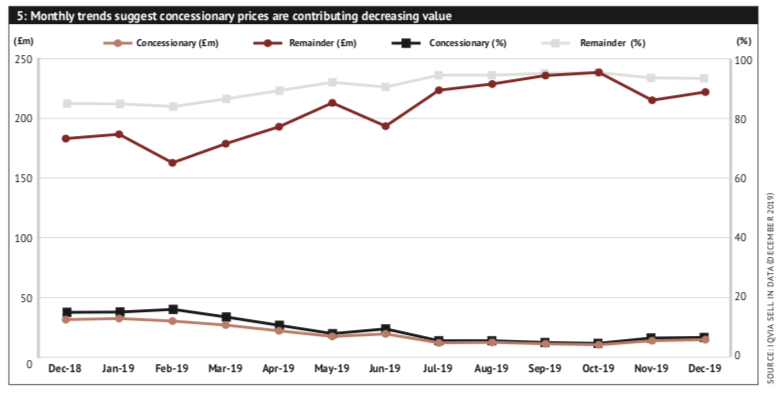 Data in this article are year to December 2019, unless otherwise indicated. 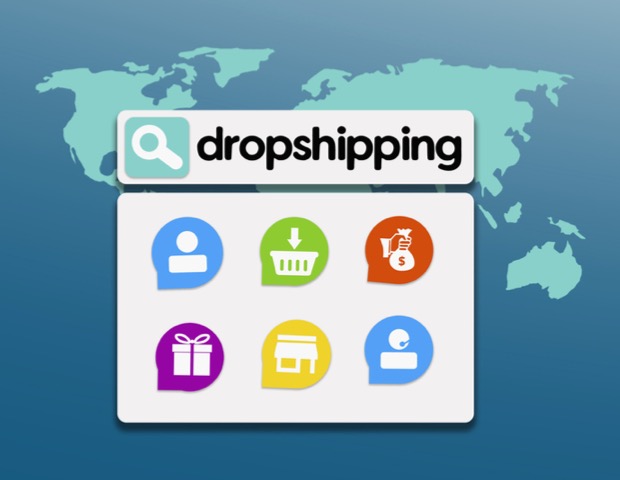 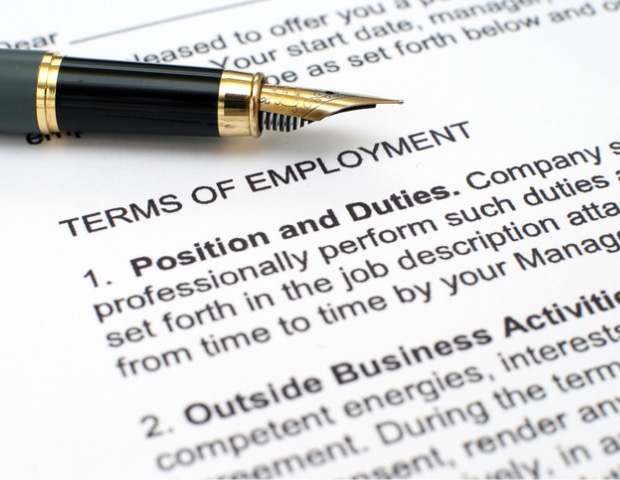 The Good Work Plan: the 'must knows'