I don’t recall a time when community pharmacy faced so many challenges,  which can make even simply doing the day job a serious struggle. Shortages, not just of branded items, but commonly used generics, is the norm these days and it’s causing huge stress in what is already a very fragile network in England.

But in addition to actually sourcing products, swingeing price changes are also a serious cause of anxiety and desperation. One thing is clear: the system isn’t working. Neither supply or reimbursement is fit for purpose.

It’s probably just as well automatic distribution of the Drug Tariff is stopping at the end of January, as it’s out of date as soon as the first copy comes off the printing press.

But for contractors, even the electronic version isn’t keeping up with invoice costs. As generic prices increase, the Drug Tariff is woefully behind the curve, so while hard-pressed pharmacists try to source drugs, they have no idea what they will be paid for them.

What other industry provides goods to customers and then has to wait and see what they will be paid? It’s ludicrous when you are trying to keep a business afloat, and it’s unsustainable.

For a system to pass the most basic of tests, surely there should be no circumstances in which pharmacies are reimbursed less than they paid for a medicine. The theory is that there is a target for retained margin (£800m in England), and that it’ll all come out in the wash, but the mechanisms for attempting to rectify injustices – price concessions, clawback – is equally inadequate, some would say feeble, as it still doesn’t ensure adequate reimbursement.

In Scotland they use ‘adjusted prices’. This slight difference in terminology might not sound like much, but maybe the word ‘concession’ reflects the attitude to reimbursement in England. It almost sounds generous.

It’s interesting to note the difference in how these, let’s call them all adjusted prices, work in Scotland and England.  In Scotland, prices for December dispensing were announced at the beginning of the month, while in England contractors waited until December 3 for the final prices for dispensing in November.

So, when contractors in Scotland knew what they had to deal with in December, contractors in England had only just discovered where they stood for November.

Moreover, the price concession only applies in the month it is granted for, so in England it is not guaranteed that  prices announced at the beginning of December will apply to items dispensed that month.

Moreover, of the 48 items on both lists, 15 are at a lower price in England than in Scotland, while one is at a higher price (see Table 2).  Of course, there are different contracts, but you’d have thought prices pharmacists in England and Scotland could buy at would be similar. It’s entirely possible of course that in a month’s time the list in England will catch up. Let’s see.

Things need to change. We need a complete overhaul to make it simpler, transparent and equitable. At the moment contractors are at the mercy of a system that is creaking at the seams. Pharmacists are caught in a no man’s land between generic companies’ pricing strategies, shortages (genuine or manipulated) and a Government squeezing the life out of the sector either by accident or design. 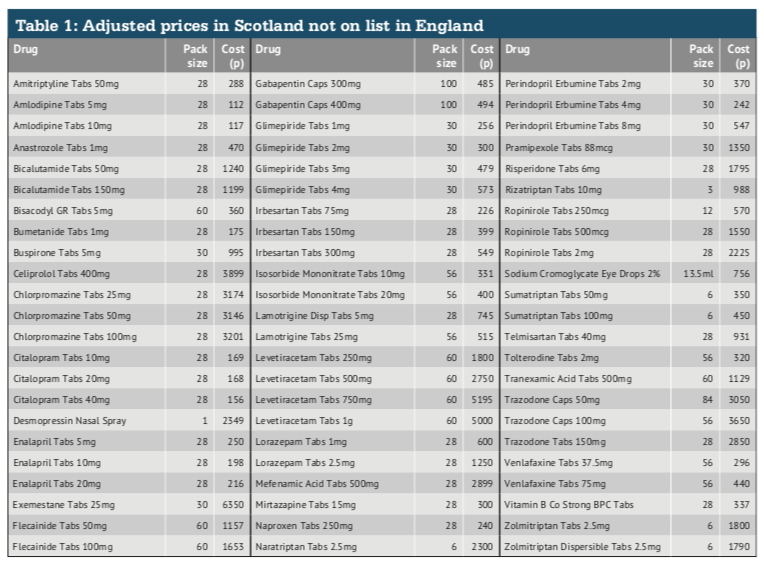 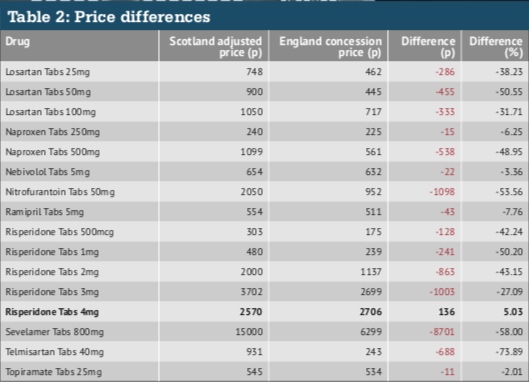