Concerned about reports that some general practice teams in England are bypassing the Community Pharmacist Consultation Service (CPCS) by referring patients to pharmacies ‘informally’, the Pharmaceutical Services Negotiating Committee launched a second pharmacy advice audit for the last week of January

Now is a good time then, to look at how the first year of the CPCS is shaping up.

According to NHS statistics collated by PharmData, in the first 11 months of the service, from November to September 2020, there was some variation in provision from month to month (Chart 1), but no noticeable trend up or down. It is, however, noticeable that the highest fees paid so far was the £476,798 claimed for 34,057 £14 service episodes in December 2019, the second month of the service, which of course included Christmas. 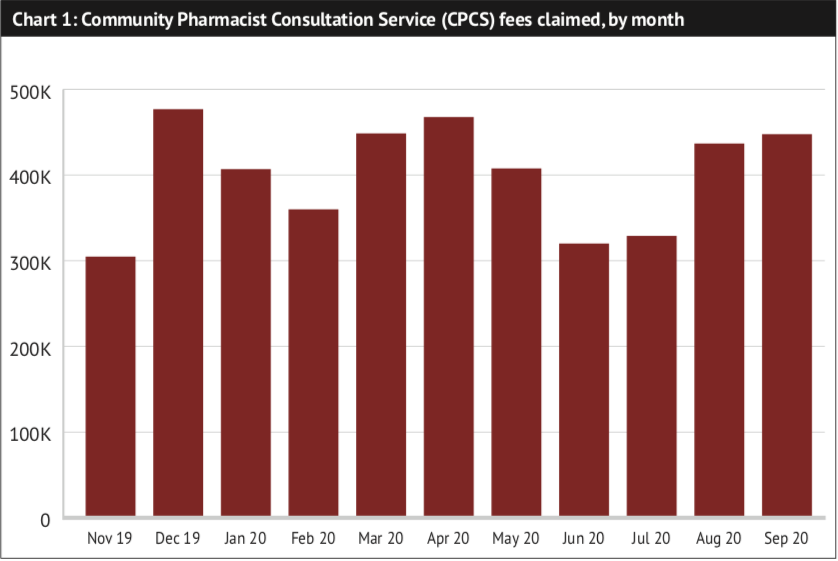 One might have anticipated that familiarity with the service among NHS 111 call handlers, together with positive feedback from patients, would have led the number of service episodes to grow steadily over time.

These data predate the expansion of the service to referral by GPs, but an early second audit to determine the scale of any emerging ‘problem’ of unfunded GP referrals and to understand wider workplace pressures for services within the sector, seems like a good idea.

PharmData has also collated the fees received for CPCS by individual pharmacies. By the end of September 2020, 13 pharmacies had received more than £5,000 in CPCS fees (more than 357 CPCS episodes in 11 months), and 99 had earned more than £3,000 (215 episodes). Of the 20 highest earning pharmacies so far, six are located in supermarkets, and 11 are open until 10pm or later in the evening. The top 10 are shown in the table below.

Of the 20 highest earning pharmacies so far, six are located in supermarkets, and 11 are open until 10pm or later

As our previous reports have shown, the pharmacies in the North and North West and the South East of England are more likely to have seen multiple CPCS requests than pharmacies in London and the South West. In the first 11 months of the service, pharmacies in the West, North and East Cumbria had claimed an average of £771 in fees, ahead of those in Durham, Darlington and Teesside (£736) and Kent and Medway (£682). By contrast, pharmacies in Cornwall and the Isles of Scilly had claimed just £128 each, those in North Central London £136 and in North West London £166.

Three localities, as grouped by the NHS integrated care system geographies, have now paid out more than £200,000 in CPCS fees. Cheshire & Merseyside leads the way, with fees claimed totalling more than £363,000 (representing almost 26,000 episodes). Pharmacies in Greater Manchester have claimed more than £324,000 and those in Lancashire and South Cumbria almost £247,000.