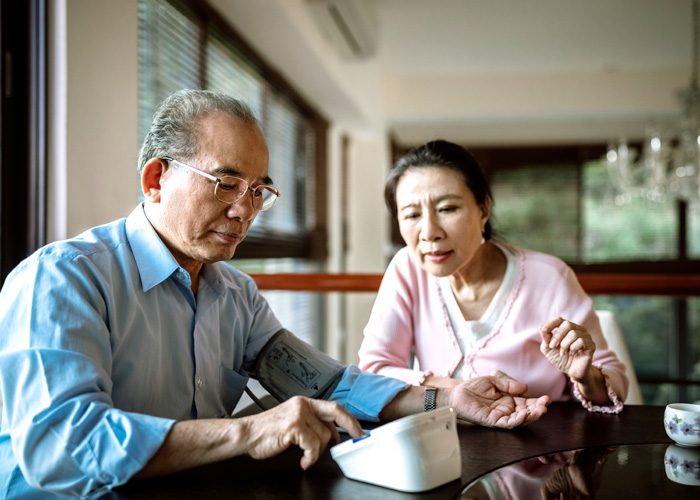 As technology evolves and consumers are encouraged to embrace self care, home diagnostics tests could form part of a wider healthcare action plan

Ade Williams, superintendent pharmacist at the Bedminster Pharmacy in Bristol, says that home diagnostics is an important aspect of his business. “Pharmacies make an ideal self care and wellbeing hub,” he says. “We offer blood pressure monitors and pregnancy testing for home use as well as in-store, along with urinary tract infection (UTI) home testing kits. We are now exploring thrush/bacterial vaginosis testing as well.”

Lee Williams, owner of The Prescription Service pharmacy in Knutsford, Cheshire, says that he regularly reassesses the pharmacy’s offering. “Originally, some of the home-based diagnostic tests weren’t brilliant in terms of accuracy or usability, so we had to make decisions about the type of data people were actually getting from them,” he says. “We currently stock all sorts of pregnancy tests, as well as blood pressure devices and the thrush/bacterial vaginosis tests, but not yet the UTI or cancer tests. We also stock the FreeStyle Libre, providing this for two weeks so that customers can see the effects that certain foods are having on their blood sugar levels.”

Home pregnancy testing has traditionally focused mainly on rapid and early urine testing, with the First Response Early Result test being sensitive enough to give results six days sooner than a missed period. However, in May 2020, JR Biomedical Ltd launched the SELFCheck pregnancy blood test under its 1st Health Products Ltd brand. The test can be used at any time of the day rather than waiting until the following morning for an early morning urine sample.

“The pregnancy hormone (hCG) can be detected earlier in the blood than in urine,” says 1st Health Products’ Catherine Rees. “The earlier women know that they are pregnant, the sooner they can make positive lifestyle changes to improve the chances of a healthy pregnancy.”

Lee Williams says it is important that pharmacies stock a wide range of pregnancy tests to suit different customer needs. “If people are asking about the expensive tests then we need to stock them, but we also need to have cheap ones available or some people may not buy a test at all,” he says. “We have to think about who is buying pregnancy tests – it’s not just couples trying to get pregnant, but maybe also a young girl who is wondering whether she needs to panic.”

According to Ade Williams, it is important to find out customers’ expectations before making any recommendations. “If a woman is hoping she is pregnant, she may not just want a binary ‘yes’ or ‘no’,” he says. “She may want to know how many weeks pregnant she is, especially if there is a history of miscarriage. If she is having fertility treatment, she may be particularly sensitive about false results. This is why we offer a holistic pregnancy advisory service, including advice on vaccinations, midwife appointments, dietary supplements and referrals.”

Bacterial vaginosis is the most common vaginal infection in the UK, and is caused by a change in the natural balance of vaginal bacteria. Yet very few women have heard of it, or they confuse it with thrush, which is caused by a fungal infection. As the conditions have different causes they have different treatments, but many women are too embarrassed to seek advice from their GP, preferring to self-diagnose instead.

In 2016, Bayer launched its Canetest Self-Test, which uses a swab to test the vaginal pH level to check for bacterial vaginosis. “We always have the Canesten test in stock so that women can pick it up themselves,” says Lee Williams. “We highlight it on the shelf and if women ask questions, we can guide them to the right section. We also offer a chlamydia testing service in which we send off tests to a laboratory.”

According to the charity Blood Pressure UK, using a blood pressure monitor at home can help people feel more in control of their health, and it also helps their doctor or nurse to get a complete picture of their daily readings.

“A lot of men ask about blood pressure devices once they reach the age of 40,” says Ade Williams. “This may be after an NHS health check through their GP surgery. Pharmacy staff should use open questions to find out what customers are looking for and why. Cardiovascular health is more than just about blood pressure, so customers should also be looking at their cholesterol, even if their blood pressure is normal.”

In November 2019, Omron Healthcare launched its HeartGuide – said to be the world’s only clinically validated wearable blood pressure monitor in the form of a smartwristwatch. It enables people to track their blood pressure, fitness, sleep patterns and general heart health, as well as receive notifications by linking the device to the HeartAdvisor app on their smartphone.

A March 2020 review in the European Heart Journal called for increased screening for atrial fibrillation (an irregular and sometimes fast heartbeat). The authors of the review highlighted the fact that around 15 per cent of people with the condition are currently undiagnosed, increasing their risk of stroke. A&D Medical blood pressure monitors now include unique AFib+ (one measurement) screening technology to monitor blood pressure and detect an irregular heartbeat.

Lee Williams says he is selling quite a few blood pressure devices that also monitor for atrial fibrillation. “While many £20 blood pressure monitors are just as good as the £40, £60 and £80 ones, some customers are looking for extra features,” he says.

“Not all of the cheaper monitors offer atrial fibrillation screening – while this isn’t vital for everyone, doctors aren’t doing regular AF checks at the moment and some people want this feature for peace of mind.”

In March 2020, a study published in the JAC – Antimicrobial Resistance revealed the benefits of a community pharmacy-ledcystitis test and treat service. It assessed the use of the DIP UTI home-based urinary tract infection (UTI) test kit from Healthy.io, which links to a smartphone app, alongside an in-store patient group directive (PGD) in Boots pharmacies to give UTI advice and treatment.

“For those juggling a hectic lifestyle, services like the DIP UTI test can help prevent the worry of getting an appointment with your GP when you’re not feeling your best, which can lead to quicker treatment,” says Kevin Heath, commercial trading director at Boots. “The DIP UTI test had previously been stocked in the pharmacy drawer, but from February, this was brought out onto the women’s health fixture, making it even more easily accessible. The app functionality guides users through the process, and it is really easy to use. Tests with links to smartphone apps are becoming increasingly prevalent in the market, providing additional information and support to consumers in a quick and efficient way. We expect this area of the healthcare market will continue to grow in the future.”

Bowel cancer is the fourth most common cancer in the UK and the second biggest cancer killer. The charity Bowel Cancer UK doesn’t recommend self-test bowel cancer screening kits an advises that people see their GP if they are concerned about symptoms.

“We don’t stock the home cancer kits, but we do signpost and encourage to the national testing,” says Ade Williams. “We have worked with Bowel Cancer UK to provide national screening in our local area.”

The Lets Get Checked Bowel Cancer Test detects the presence of blood in the stools, which is often invisible to the naked eye, but may indicate cancerous or precancerous growths in the bowel. Pharmacy customers buy the kit, return a sample in the post to a central laboratory and then receive a phone call from an experienced nurse to explain the results. The Lets Get Checked website stresses that patients who have already noticed blood in their stools, or any other worrying symptoms, should talk to their doctor. However, they may consider using this test if they are experiencing gastrointestinal symptoms or have a history of conditions such as adenoma (benign tumours), inflammatory bowel disease or type 2 diabetes.

With so many home testing kits and devices now available, and more being introduced regularly, it is important that pharmacy customers understand how to use them properly and know what to do with the results. Many pharmacistssay that they would like self-testing kits to be part of a commissioned NHS service.

“We have to make sure customers use them as part of a wider plan,” says Ade Williams. “This isn’t just about selling a product, but is about having a protocol in place. Customers should use the test as a self care tool rather than a diagnostic tool as there are always false negatives and false positives – if they are worried about any symptoms, they must come back to us or see their GP.