Dermatology in the pharmacy

Dermatology in the pharmacy 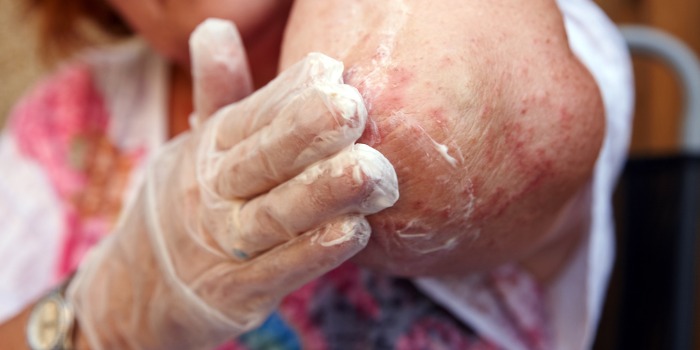 As many as 60 per cent of people have a skin condition at some point in their lives, according to the British Skin Foundation.

According to Dr Tanya Bleiker, president of the British Association of Dermatologists, pharmacists have an important role to play in supporting people with mild skin problems as they are often the first port of call for help. “Between a quarter and a third of people will have a skin problem that would benefit from medical care at any one time,” says Dr Bleiker. “It is essential for pharmacists to identify and signpost people to their GP when the problem is not mild or is unusual.”

The following are some of the most common skin conditions that may present in the pharmacy.

This common inflammatory condition can affect people of all ages, but is most common in children, with one in five affected in the UK. Atopic eczema, the most prevalent form, accounts for 30 per cent of all dermatological consultations in general practice and 10-20 per cent of referrals to dermatologists, says the National Eczema Society.

Emollients are the mainstay of treatment. They provide an occlusive layer on the skin that reduces water loss and improves moisturisation. They also have an anti-inflammatory effect and help to repair the skin barrier. “When it comes to emollients, the most important thing is to make sure a patient is getting one they will use consistently,” says Dr Bleiker.

Emollients should be applied regularly and always after bathing, thinly and evenly, in a downward motion following the direction of hair growth. Children will need about 250g a week and adults 500g.

Topical corticosteroids can be used to reduce inflammation and itching. NICE recommends they are used once a day for under 12s and up to twice daily for over 12s. “When a patient is prescribed a topical steroid, it is important that they use sufficient amounts and are not advised to use too sparingly. Pharmacists should familiarise themselves with the use of the fingertip unit guidance,” says Dr Bleiker.

Dr Tanya Bleiker, president of the British Association of Dermatologists, and Dr Adil Sheraz, consultant dermatologist and British Skin Foundation spokesperson, offer this advice for pharmacy teams to pass on to customers:

Contact dermatitis is a type of eczema that occurs when certain substances, such as soaps or chemicals, come into contact with skin. Excessive hand washing is a common cause, as are allergies to substances including nickel, latex and fragrance. Symptoms include a rash, redness, itching, blistering and scaly skin.

“During the pandemic, there has been an increase in irritant hand dermatitis due to over-washing,” says Dr Bleiker. “It has been particularly common among healthcare professionals.”

Avoiding the source of irritation is advisable, and Dr Bleiker says: “Along with emollients and soap substitutes, mild irritant hand contact dermatitis also benefits from mild to moderate topical corticosteroids.”

Around two per cent of people in the UK have psoriasis, an immune system disorder that causes patches of red, flaky, crusty skin with silvery scales, usually on the elbows, knees, scalp and lower back. In half of sufferers, the nails are affected too. People with psoriasis have a faster skin cell production rate than normal, and this causes a build-up of skin cells.

Topical treatments include coal tar preparations, vitamin D analogues, dithranol, steroids and calcineurin inhibitors. Emollients are also an important part of treatment. Phototherapy can be recommended by a dermatologist for stubborn patches of psoriasis. To slow down skin cell growth, the oral retinoid acitretin may be prescribed, while methotrexate or ciclosporin may be used to calm the immune system.

Hormonal changes mean that nails can become harder, softer or more brittle during pregnancy, while during the menopause, dry and brittle nails are common. With age, toenails tend to become thicker and harder, while fingernails become thinner and break more easily.

Between three and eight per cent of people in the UK will experience fungal nail infection, with toenails most commonly affected. The condition is more common among the over-60s and in young people who share communal facilities. It is almost always spread by a fungal skin infection – usually athlete’s foot.

OTC topical nail treatment – amorolfine 5% nail lacquer – can be recommended when up to 50 per cent of up to two nails are affected. This should be applied once or twice weekly after filing the nail. It should be used for nine to 12 months for toenails and up to six months for fingernails.

If topical treatment can’t be used or is not successful, patients should be referred to their GP. Oral terbinafine 250mg is first-line treatment, prescribed for up to three months for fingernails and up to six months for toenails. An alternative drug is itraconazole, given as a pulsed treatment.

Self care tips for healthy nails

Nail problems can sometimes be a sign of a more serious condition.

Mintel research indicates that the hand, body and footcare category is benefitting from the focus placed on skin health during the pandemic. Lotions are the most popular format, says the analyst, with cracked skin being the most common issue experienced on hands and feet, and irritation ranking second for hands. Popular products include handcare brands that combine long-lasting antibacterial properties with hydration. Quick drying products are also popular. Interest in natural ingredients remains high across the category, with more than 50 per cent of respondents in Mintel’s research saying it was important, and more people now looking for sustainably sourced products.

Numark OTC business development executive Cathy Crossthwaite, explains: “Skincare is one of the top performing toiletries categories, holding about seven per cent of pharmacy space at present. This is primarily due to the performance of products specifically for dry skin conditions. Within footcare, the fungal nail category holds approximately 16 per cent share.”

“Medicated skincare has seen an increase in sales across all subsections,” says a LloydsPharmacy spokeseperson. “It appears the stress and anxiety of the pandemic continues to be prevalent, especially in younger age groups, and this can cause flare ups of eczema, psoriasis and dermatitis.

“Regime is key, so it is important not just to offer a cream or lotion in a specific brand. A regime needs a cream/lotion, a treatment and a wash/bath product. Currently, only five per cent of dry skin sufferers use a dry skin specific shower gel or body wash, and only 39 per cent of people with a dry skin condition use a moisturiser as part of their routine. Of those that do, 53 per cent moisturise reactively rather than proactively.”

Lloydspharmacy adds that use of moisturiser is much lower than the NHS recommends – around five and a half times a week versus the recommended 21 times a week.

“We get lots of requests for products to treat dry skin, eczema and dermatitis, less for nail conditions, but I think that’s because treatments for fungal nail are expensive, so people go to their GP. Customers ask what might be causing rashes and dry skin, and don’t usually realise nail discolouration indicates an infection. Put products at eye level in an accessible area. Customers want to be able to pick them up and look at what they contain. Have leaflets out so they can browse. We use illuminated signs in our pharmacy to advertise products.”

“This is a huge category for us. Skin conditions have become more of an issue thanks to alcohol gels and increased hand washing, so we get a lot of customers asking us about dry, cracked skin, especially on their hands. E45 is still a favourite but we do steer patients towards the more basic and generic ranges as they are cheaper. Aveeno does well too. We sell a lot of hydrocortisone cream and antifungal creams. I’ve noticed customers going back to basics, with simpler skin formulations that avoid additives and contain fewer ingredients.”

“Customers often need help in selecting supplements that would be beneficial, particularly when they have scarring or pigmentation. Vitabiotics Perfectil Original Triple Active is a popular seller. The biggest change recently has been the number of men seeking support, with fungal nail infections being a top concern. Providing a holistic treatment pathway for skin and nail conditions, including appropriate supplements and cosmetic products, will help increase revenue and provide customers with the best service.”